Ths month marks 30 years – thirty years! – since the launch of  Bow Wow Wow – the Malcolm McLaren managed,  Annabella luWin fronted harbringers of a new cassette tape only release revolution. Well the cassette only revolution idea was given up after two releases and Adam Ant made more hay than they –  out of the patented Burundi beat.

But Annabella herself went on to say this, later.

The whole scene from which the BWW’s sprang – a warped weave of British pop odballs, including gun brandishing Dandy Highwayman Stuart Antman Goddard  and  His Ants (not his Aunts. Now there’s a thought…”), Siouxsie with the eye make up like LIzaMinnelli and the , oh look here’s some frightfull armbands the Nazi’s used to wear  too – and The Banshees. 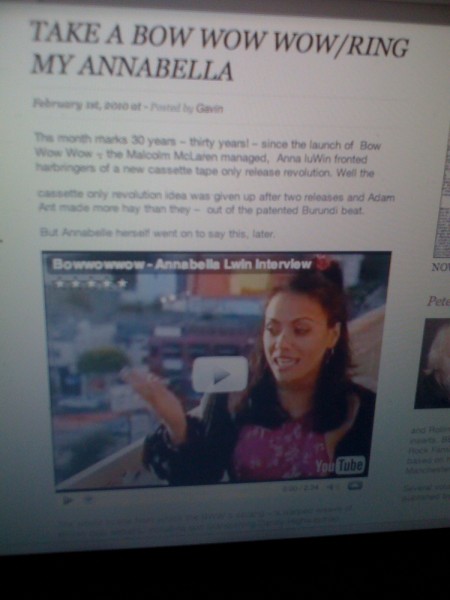 Whatever became of  “Lester Square” (synth /guitar in the 3rd Monochrome Set) , I wonder?

2 thoughts on “TAKE A BOW WOW WOW/RING MY ANNABELLA”