We’ve been meaning to do this for a while: finding a way of linking the trees with music. So we’ve taken excerpts from the tree in rough chronological order and added the chance to listen to samples from some of the tracks, by linking to the UK iTunes sites. Hope you like it.

Start at the top left hand corner of the tree. The Kinks first line-up:

And no surprise about our representative musical selection:
You Really Got Me – The Kinks: The Singles Collection

Not every band in the tree has music we can trace in MP3 version, unfortunately, so for the time being we pass over Mark Four, but find ourselves looking at The Birds, featuring the teenage and no doubt fresh faced Ron Wood. If you listen to their music you feel you know it, but the guitar and mouth organ tells you one thing, the bass another and the vocals are no one you know. 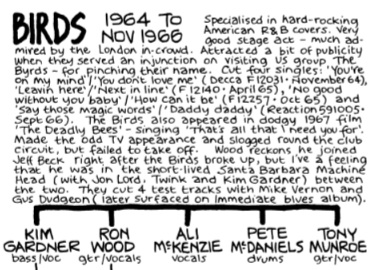 And then we come to the first line-up of The Pretty Things, whose link to the other bands in the tree is guitarist Dick Taylor, who played bass with the group Pete refers to as the Embryonic Stones (another line-up with no recorded music). Here are The Pretties:

And sounding not unlike the Stones, full of promise and early success, here is their single Rosalyn:

Rosalyn – The Pretty Things – Sounds Of The City – London

And, of course, at the same time we have the first genuine Stones line-up:

And what music to choose? So much brilliant work. Let’s take their first UK number one single, the Womack and Womack song:

Now at aroundthe same time The Creation descended from Mark Four, later on bringing Kim Gardner from the Birds with them.

The Creation’s most successful release was Painter Man, with Kenny Picket on vocals, sounding, to some of us, like a poor man’s Kinks.

Painter Man – Our Music Is Red – With Purple Flashes

They sound almost a different band when Bob Garner sings.

One intriguing recording from this time is Hey Joe, in what sounds like a somewhat clumsy attempt to reproduce the Jimi Hendrix version, even down to the ‘walking bass’, at least for the first half or so of the track, before it shifts mood into curious semi-spoken mode.

Hey Joe – Our Music Is Red – With Purple Flashes

Hey Joe – Are You Experienced

Yet, here is Wikipedia on the subject. The song, of course, was already a standard, but at a much faster tempo.

“Some accounts credit the slower version of the song by the British band The Creation as being the inspiration for Hendrix’s version; Chandler and Hendrix saw them perform the song after Jimi arrived in the UK, although The Creation’s version was not released until after Hendrix’s.”

Back, now to the Kinks, in line-up 1a, with John Dalton and Pete Quaife both featuring on bass, although who played on which recordings seems rather murky. 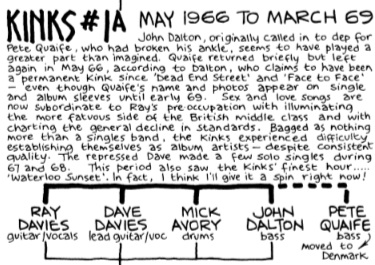 And one of many brilliant records from this period:

And then The Creation in second and final lineup:

A song from the era:

The Girls Are Naked – Our Music Is Red – With Purple Flashes

And on to The Pretty Things, where it just never seemed to work out quite right. It must have been galling for the band to compare the rise of the Stones with their own fate. Here are line-ups 2-5:

And some of their singles and album tracks:

Midnight to Six Man – Get the Picture?

Death Of A Socialite – Emotions

This is from their ‘rock opera’ S.F. Sorrow, written before the Who’s Tommy, and the recording is from a live version featuring David Gilmore.

Meanwhile the Stones were ruling the world in their second line-up, Mick Taylor replacing Brian Jones on guitar.

Oddly, though, this line-up had no UK number one singles, although five albums in a row – from Let it Bleed to Goats Head Soup – all went to number 1. Their best performing single in the UK was the first with this line-up Brown Sugar, number 2 in the UK, number 1 in the US. 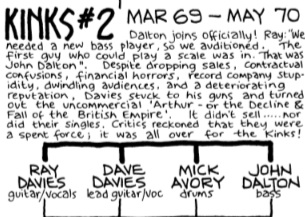 The Kinks, meanwhile, fell, rose, and fell again. Line-up 2, with Dalton officially established on bass, struggled, charting only with Victoria.

Victoria – The Kinks: The Singles Collection

A year later John Gosling came in on keyboards, giving us line-up 3, which produced one of the classics of all time, Lola. But after that chart success, for both singles and albums was elusive.

Lola – The Kinks: The Singles Collection

The Pretty Things fared no better. Line-up 5 called it a day in June 1971, but then the band reformed in November, creating line up 6 and, a few years later, 7, but with little success.

The last three albums are still available but not in the iTunes store. Here are the Amazon links for those who are perhaps too curious for their own good:

Freeway Madness was from line-up 6 and didn’t chart. Line-up 7 gave us Silk Torpedo (US charts 104) and Savage Eye (US charts 163). And that, more or less, was that except for a brief period with a name change to Metropolis.

To rub it in the Rolling Stones, in line-up 3, continued their run of album success, especially in the US. 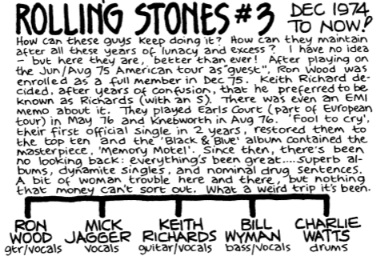 Singles, during this period, didn’t do quite as well, although Miss You was a US number 1 (number 3 in the UK – what had they done to offend us? Or was it just bad luck to be up against John Travolta and Olivia Newton John, as well as Boney M, that week?).

Miss You – Some Girls

The Kinks held on for a while. Line-up 4 now. 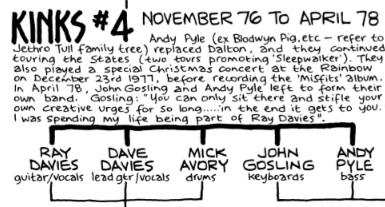 Some modest success. The track ‘Rock and Roll Fantasy’ charted in the US at 30, and from the link below, seems to have found its place in the US.

Line-up 5 is the last in the tree. Read Pete’s words carefully! A prophet in his own time. 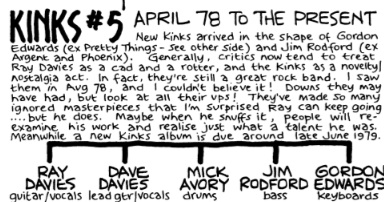 (Wish I Could Fly Like) Superman – The Ultimate Collection

If you are still with us, thank you for reading through to the end. If you enjoyed this, maybe you need the print !