Following on from the success of the brilliant Rock Family Trees exhibition at the Barbican last summer, the discerning folks at the Music Library (thank you Michael Southwell!) have decided to put on another, on an even bigger scale. Not only that but they have twisted Pete’s arm (not his drawing arm, thankfully) to come and talk about the Trees and the characters in them, his experiences as editor of Zigzag, and as Pete himself puts it, generally ramble on about his bizarre life in the music business.

An Audience with Pete Frame – a rare event indeed – takes place on July 2nd, at 7.00pm. Tickets, from the Barbican Music Library, at the amazing bargain price of £6. You’ll kick yourself if you miss it. Email [barbicanmusic@cityoflondon.gov.uk] or telephone [020 7638 0672] to reserve your place.

The exhibition – a summer spectacular – runs from July 3rd to August 30th. No ticket necessary.

I was 21 years old when I saw Pete Seeger at the Royal Festival Hall on the South Bank of the Thames in London. Saturday 29 February 1964. It was the most inspirational concert I had ever attended. The core of his programme was the same as that preserved on the album ‘We Shall Overcome’, recorded live at Carnegie Hall, just over eight months earlier – old songs, traditional songs, Woody Guthrie songs, a selection of the best new contemporary songs by Bob Dylan and Tom Paxton and other Greenwich Village folkies, and a whole section of Civil Rights songs. An amazing repertoire.

I went with my friend Mac (who had been at school with me and who now toiled, as I did, at the head office of The Prudential Assurance Co in Holborn) and we came out of there with our hearts bursting. We were both deeply affected; Mac more radically than I. He went to work on Monday and handed in his notice . . . dropped out and began an odyssey which took him around the world. Being more cautious, I remained at my desk for another five years – until I could stand it no longer, and I dumped my day job too. Although I had no experience whatsoever, I was going to be a writer, I had decided. The magazines that Seeger and his friends had created – Sing Out! and Broadside – and the underground press which followed in their footsteps, had much to do with my decision. I wanted to be part of their world, the world that Pete Seeger inhabited.

Fast forward to 1994. I was doing a lot of work with Kevin Howlett, an inspired maverick producer at BBC Radio, who was always thinking up interesting projects for us to dive into. His latest was a series of four one-hour documentary programmes to be called ‘Signs Of The Times’, exploring the voice of protest in popular music – and, as usual, he rolled me in to do research and interviews, and to help construct the programmes. What a plum gig! I got to meet and talk to Bernice Johnson Reagon, Billy Bragg, Judy Collins, Michael Franti, Joan Baez, Graham Nash, David Crosby, Gary Byrd, Labi Siffre, Jackson Browne, Gil Scott Heron, Country Joe MacDonald, Mary Travers, Tom Robinson, Linton Kwesi Johnson, Bruce Cockburn, Steve Van Zant and various others – in such exotic locations as New York, San Francisco and Charleston – but, the icing on the cake, I got to meet my hero, Pete Seeger!

On Monday 14 February, from my room at the Paramount Hotel, just off Times Square, I phoned for instructions on how to get to his place – and Kev and I duly caught the train from Grand Central Station to Cold Spring, where Pete met us and drove through the snow, along open roads and winding tracks, to his ‘cabin’, as it was usually described, overlooking the Hudson. Just as I had pictured it. Rustic, warm, unique and instantly comfortable. His wife Toshi had prepared an exquisite meal for us, a rice-beans-okra-courgette delicacy that Gordon Ramsay could only dream of, accompanied by home-made bread. I was delighted to find that no piece of crockery or cutlery matched any other piece. To complete the repast, Pete produced several tubs of Ben & Jerry’s ice cream: the partners in that firm sent him a selection every month, just for being Pete Seeger. How cool is that?

We met his daughter and two grandchildren, who were visiting, and then sat down beside a crackling log fire to conduct the interview – during the course of which, I told him that I had been in the audience at his seminal 1964 Royal Festival Hall concert and I showed him the programme I had saved. Of course, although it was a life-changing event for me, he didn’t remember it as being any more important than the many hundreds of other concerts he had played, at all of which members of the audience had no doubt experienced the same sort of road-to-Damascus conversions as I had.

After the interview, he drove us back to the station, stopping en route to visit his friend Seth, who had an old machine shop, which he proudly showed us. He also gave me a jar of honey. Pete had given me a songbook and a CD, and memories to last forever.

I got to my hotel bed about 1.30 am and when I awoke the next morning, the whole episode seemed like a dream sequence. But I had the cassette tapes to prove it had really happened. 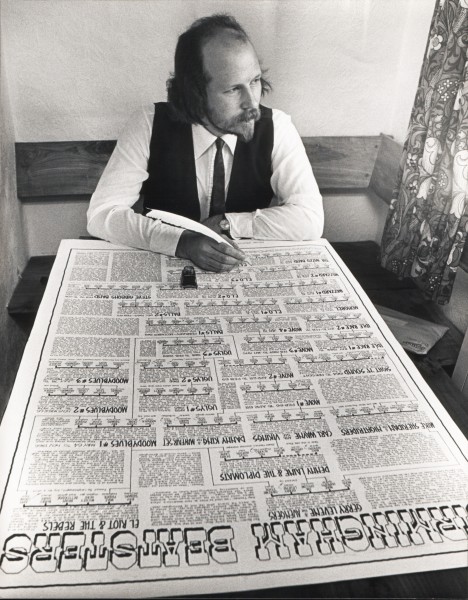 The Barbican music library is paying Pete the honour of an exhibition of his work. In fact a double honour: two exhibitions. The first one runs from August 8 to September 28th. Don’t miss it. It will be over before you know it and then you’ll kick yourself. Details here.

One of our favourite Rock Family Trees is not so much a tree but a visual and historical map: Mississippi, Cradle of the Blues. A remarkable account of the blues artists originating in the state of Mississippi. Here are the four short columns at the start the tree, top left: 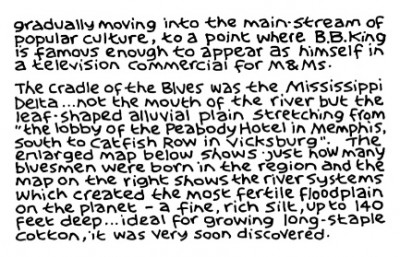 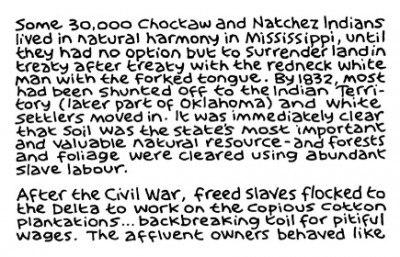 In the coming weeks we will bring you some of the highlights of the tree. Here is one to start with, the blues artists associated with the town of Clarksdale:

We all know this born-in-Clarksdale bluesman:

But what about Brother John Sellers?

And this beautiful number from Maxwell Street Willie Davis?

All enquiries and orders to :
pete.frames.rock.family.trees@gmail.com

And of course, if you need a copy of More Rock Family Trees you know what to do:

We were very pleased to receive a Google Alert pointing us to a new review of Pete’s fabulous Even More Rock Family Trees. Here it is:

Machine-written reviewing still needs some work, it seems. But funnily enough, my neighbour did buy one as well, and he also found it very durable too. Get yours here:

but the reviews of Even More Rock Family Trees show why it is this year’s Xmas gift for the discerning rock maniac.

And in the best books of the year at Shindig Magazine.

Take a look for yourself.

Not so long ago we drew your attention to the new Creation Records film, Upside Down. Well, you can see it on BBC4 tonight at 9.00 pm and if you like it, stay tuned for Creation at the BBC, archive footage of Creation bands, and if that isn’t enough, a documentary of Alan McGee (proud owner, by the way, of number 1 in the limited edition of the Creation Records fine art print. Which, of course, appears in Pete’s new Even More Rock Family Trees

Have you got your copy of the soundtrack to the movie yet? Just downloaded mine and am listening to Slowdive as I type. Fabulous stuff.

Here’s where to get it (in the UK anyway).

And here’s a movie trailer, with reviews and other special features.

And here’s the movie itself. One to keep.

And even better still, here is the Pete Frame Creation Records Rock Family Tree. Limited edition fine art print, as owned by Alan McGee himself. We kid you not.

A bit of history here. Some snaps from a sunny day (well, by British standards) in 1998 when Pete’s More Rock Family Trees was published, and the publisher decided to celebrate by decorating Soho Square with some Trees. Well that how we always celebrate special occasions. Don’t you? <br

The good citizens in the top picture are poring over The Folk Music Revolution in Greenwich Village. You can try to replicate the experience here. 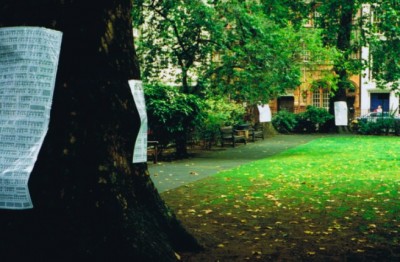 Get your own copy here!

Well, you ought to be. Fabulous exhibition, all finished now. But wait!! The Elgin have asked us to keep the Trees and Photos up for a couple of weeks. This means it is still possible to arrange a personal viewing for those who are kicking themselves for missing out. Let us know and we will see what we can do. Jo at familyofrock.com